The biggest act of love!


There's a beautiful story of how one boy asked his father how much he earns per hour. His father said $ 50. Then the son asked if he could lend him $ 25, to which the father got angry and told him to leave him alone. He just came home from work, tired, and now he's son is bothering him. After a while he calmed down, went to his son and gave him $ 25. Sin  folded under the pillow took some money and the father got angry again. Why did he ask for the money when he already had some? He works so much and his son only wants to buy stupid things!

His son said: "Dad, do not be mad. I was asking for money because I did not have enough. Now I have. Here's $ 50, come tomorrow an hour earlier to have dinner together."

Another story tells of how an old man  found himself in the attic of his son's diary, in which he described the best day of his life. It was a day when the two of them first went fishing. He looked at his diary and saw that it was the same day he wrote, "I've wasted the day  and did not earn anything." 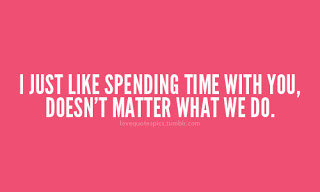 Time is something that we are all assigned to the same degree. Everyone's day lasts 24 hours. Not a minute less, not a minute more. We differentiate ourselves by how we use it. Some are good at it and some are not.
There are different ways to show love, and the father in the story that much more work is probably showing his love for his son show-so he wants to earn more money and provide him the best possible living conditions.

The problem is that the boy concludes, "You have no time for me, I'm not important, you do not love me."
It's nice when others buy us gifts, but that's not enough. No relationship can not be based on material values.

To build any kind of relationship, you need to take time for people we care about. You need to spend time with them, to pay attention to them. Not only watch, but also see. Not only listen, but hear.

Many children have grown up feeling unloved, even though their parents loved them infinitely. They loved them so much that they worked more than one job just to earn more money for their children to ensure better living conditions.
And then, overnight, you see a grown up stranger critisizing you, angry with you, telling you that you don`t know anything about them.

There are also many love affairs and marriages that are broken though it was love between them. Men were rushing in all directions to make as much, to show that they are capable and successful, so their loved ones become proud of them. Women are also raced in all directions, working, raising the children, cooking, preparing the house, pleasing their man. And then after a while the two strangers who once loved each other meet, both unhappy, disappointed, with a feeling that none of it gave not enough.

And it's not enough. To make the relationship work, and grow, it is necessary to spend time together, the talks are necessary, we need a common activity in which all those involved enjoy. 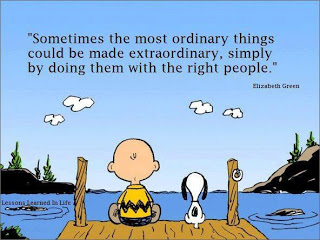 In business you can not be successful if you do not invest enough time and energy in your work assignments.
Why do you think that is possible in close relationships?

Maybe you did not know, you might have thought that others know that you love them by doing things for them. Because they give up and sacrifice to give them something. Now you know that is not so.

Your son will not  be furious because he does not have the best shoes, if you were with him on the fishing trip. He`ll insist for new shoes because he thinks that this is evidence of his value. Because he thinks he is not valuable and interesting. Where did he get that idea? His own father never took the time just for him, just to be with him, to hear him at the school, to see his album with pictures super hero.

Your partner will not love you less if  in the sink there are three plates and four glasses. They will not notice it until you see it with a smile, happy to be there next to you. He will be angry and disappointed, he will feel unloved when after the whole  day of disinfecting the house you do not have time and energy to listen. You're so tired you have no strength left to hug him. No, he is not ungrateful, he's just a human being which needs attention and which need you for taking the time for him. Because he is important.

In today's chronic shortage of time, how to solve this problem?
By planned spending time with you dear and loved ones. Plane that when you  plan your day, week, month ... and keep in mind that your loved ones and that they need your time, you need them more.

I recently read that one man (who works very hard and is successful in his work) wrote that, although they were handing out thousands of miles, his sweetheart, and he sat next to each of your computer and watch the same movie. And even though they were physically razdovojeni they were close. Closer than some who may have sat side by side, each in their thoughts and their plans.

Will you therefore be less productive and successful? No, quite the contrary. You will be calmer, happier, more fulfilled. You will have more energy, the faster you deliver. You will have more time and energy for you and your family. This is creating of a new circle, this time  pleasant  one, filled with moments of intimacy and love.

Posted by emocionalna.inteligencija@gmail.com at 10:50 AM